Chaz Maviyane-Davies, an award winning activist graphic designer, is a Zimbabwean exile. In the lead up to the 2002 Presidential election, he ran a series of striking ads, aimed at Zimbabwean voters. His aim, he tells us, was to “raise consciousness about the situation”. He spent 2-3 hours a day on the pieces and distributed them globally via email. While it might have been more effective to distribute the pieces on print, cost made it impossible for Maviyane-Davies – instead, he relied on sending them globally and hoping people would distribute, print and be moved by them. A later project, Portal of Truth, offered stark graphic commentary on the stolen 2002 Zimbabwe elections. His images are a tour of some of the darker moments in Zimbabwean political history, touching on the church’s unwillingness to enter into politics, Zimbabwe’s incursions into the Democratic Republic of Congo, the government’s willingness to print money to contest elections, voter intimidation by the military and efforts to prevent election observers from monitoring elections. Many feature Zimbabwean proverbs: “If you think you are too small to make a difference, try sleeping in a small room with a mosquito.” 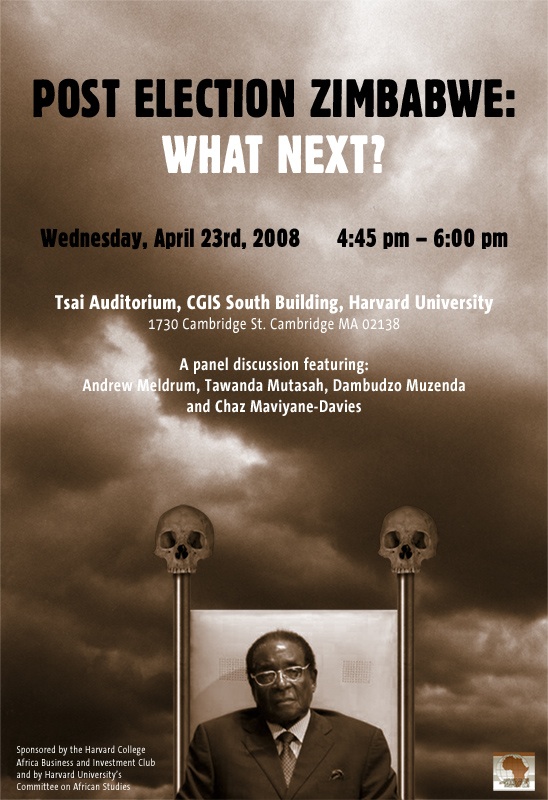 Maviyane-Davies didn’t create images for the 2005 or 2008 elections, but he’s been working on images in the last few weeks, including one for the poster that advertised today’s event, featured above.